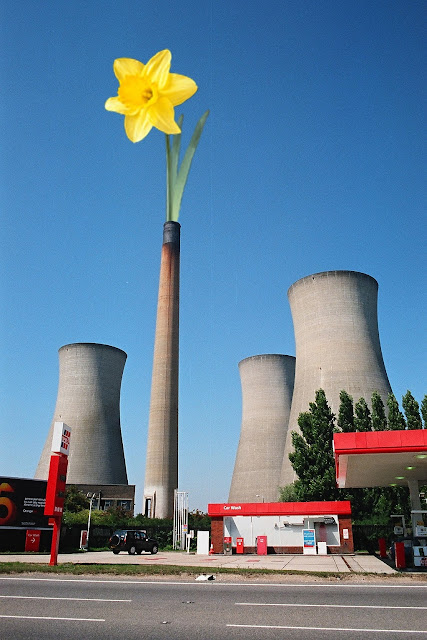 Introduction
The Power Flower is an iconic  structure of  technical scale and green innovation that will promote sustainable  environmental causes. It will also act as a catalist to regenerate the local economy and give back a sense of civic pride by championing East Kent as a research and development centre for renewable resources across the UK, Europe and the world.
Description
The Power Flower is a 200 foot daffodil installation placed in the 450 foot high smoke tower of a disused coal power station located on the Kent coast of England. The Power Flower will rise above the smoke chimney of the redundant fossil fuel plant to become a symbol of the future and an environmental message of sustainable development to the world from the redundant power stations of the past.

Location
The site for the Power Flower is Richborough Power Station near the Isle of Thanet in Kent in the Thanet / Sandwich corridor between Ramsgate and Sandwich. This site has been chosen as it is unique with low lying land for many miles around, situated between two historic towns with a high way running between the two and past the tower. The Thanet / Sandwich corridor has been cited for redevelopment by the EU which gives an project of this scale rejuvenate qualities for the surrounding area and the local people.
Vision
The aim of The Power Flower is to dramatise the landscape by day with a sculpture of epic scale and by night to be a beacon of light that can be seen for a radius of 12 kilometres, 360 degrees and as far away as France across the English Channel. When viewed from a far the illusion of The Power Flower will turn the surrounding landscape into chequered table top with a tall thin vase and a flower sitting upon it. As the installation is approached by rail, car, bicycle or foot, the sheer scale of the flower will invert the viewers experience by miniaturising them. The impact of this experience will be to bring home the sheer scale of nature and evoke a feeling of mortality. 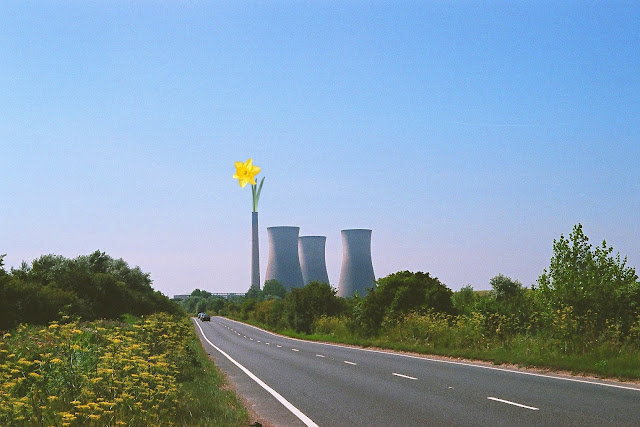 Exhibition Centre
The Power Flower will power an energy exhibition at the base of the tower. through a skin of voltaic cells on the installations petals. The exhibition centre will promote renewable energy resources such as solar energy, water turbines, wind turbines, geothermal energy and wave energy from the sea. It will explain the science of energy and aspects of the global politics and encompass aspects of the energy enhancement from the past and the future. On a local level the exhibition centre will aim to coordinate with the off shore wind farms  in East Kent and with Thanet Earth, the largest greenhouse development in the UK covering an area of 91 hectares.


Design Policy
Photovoltaic technology [capturing the suns energy and converting it into electricity] was born in the 1950’s and invented to power satellites and space shuttles yet the technology still  remains in its infancy. The Power Flower project hopes to project further research into photovoltaic cells in order to create a more versatile and efficient product with a larger variety of colours for the use in arts and architecture in cities.

Green
A house with daffodils in it is a house lit up whether there is sunshine outside or not. This light will be The Power Flowers message of hope and regeneration to the world as it rises from the smoke tower of a redundant power station an energy resource of the past.  With the continued use of fossil fuel the threat of global warming is now fact. The effect that this is having to the planets weather systems and all species on earth is taking dramatic effect in our life time. The Power Flower will represent the sun and the awakening of the human consciousness demanding change by its existence and inspiring change in our life time.
Local Population
The population of South East England [not including London] 2001 census was 8,000,550 and covers the counties of Berkshire, Buckinghamshire, East Sussex, Hampshire, Isle of Wight, Kent, Oxfordshire, Surrey, and West Sussex.  The local population of Thanet is 130,000 and covers the districts of Ramsgate, Margate, Sandwich, Broadstairs and the parish districts of Acol, Birchington, Cliffsend, Manston, Minster, Monkton, and St. Nicholas-at-Wade. Thanet’s boarders run as far as Canterrbury to the West and to Dover and Deal to the South.
Social issues
Thanet is in a remote peripheral location suffering from long term neglect, negative media attention and high unemployment. The estimated Gross Domestic Product index of Multiple Deprivation indicates that Thanet is amongst the bottom 60 local authorities in England and has 7 wards in the worst 10% in England. With high numbers of old people, low numbers of affluent people and poor overall indicators for health, as a result a great deal of planning is being done to encourage more businesses to relocate to the district especially the Thanet / Sandwich corridor where the Power Flower will be located.
Regeneration

Among plans being considered in Thanet is an arts centre in Margate, the Turner Gallery, and a new community centre in Broadstairs. Redevelopment and renovations are also being undertaken at Margate with a Heritage Amusement Park, whist at Cliftonville the local Lido is being refurbished and a new hotel is being built in Monkton. In addition, the District Council has introduced an empty property initiative and has compulsory purchased empty and derelict buildings with the objective of bringing them back in use.
Economics
The Power Flower will create a vision for East Kent by becoming a centre for scientific research for renewable energy resources. This will be achievable with cheap land open for development in the Thanet / Sandwich corridor, cost effective local housing for workers, a pleasant environment by the coast and improved travel links with a local airport at Manston, rail links to Europe from Ashford and with existing local research centres such as Pfyzer not on mile away from the proposed site.
Wind Farms
There is an off shore wind project located off North Foreland, 3 miles north of the site which should be completed by 2010. The project is expected to have a total capacity of up to 300 MW which, on average, is sufficient to supply approximately 240,000 homes per year with green energy. The off shore wind project will thus make a significant contribution to the Government’s national and regional renewable energy targets whilst The Power Flower will reinforce the governments message and make East Kent a centre for renewable energy, research and excellence that will be recognised around the world.

Social Inclusion
The Power Flower will encourage civic pride and a sense of community in an area that has been neglected for many years. By its creation ‘The Power Flower’ will inspire the local community in a way that only an arts project of this scale and vision can do. It will become a satellite for regeneration and like a beacon of light attract business and people to the area. It will promote best of breed design and buildings of excellence as outlined by The Urban Task Force report and by doing so reduce crime, increase education and actively assist social inclusion by creating work across all sections of society.
Tourism
Tourism is worth an estimated £1.306 BN to the Kent economy with day trip expenditure at £625 M. This is estimated to increase in the wake of the hotter summers and people flying less and local transport networks improving. The Power Flower will with out doubt put Thanet on the eco tourists map and bring  people to the area to visit local heritage towns, the many beaches and the nature reserves situated around Richborough. This is turn will help the local economy and further develop local business and the cultural industries specifically Minster located only a short distance a way and under proposal as a heritage village. The Power Flower will thus work with the tourism alliance and put East Kent back in the cultural conscience of the UK as a destination of beauty, ecological tourism and a holiday destination to be enjoyed by all.
Summary
The Power Flower is an installation of scale that will have impact on both a social and a scientific scale and become an icon for the South of England, and the regeneration of East Kent. The Power Flower will give hope to a local community suffering from high unemployment and social deprivation in turn it will regenerate and attract eco business, tourism and bring positive media coverage to East Kent. The Power Flower will also signify the beginning of a new era in global politics as communities across the planet reach out for renewable safe energy.
Posted by Hackney Gourmet at 17:44